The Spruce has an article about small kitchens. Here’s one of the accompanying pictures.

This cracked me up, because the floor space in my kitchen is about the size of the top of that blue counter. Their idea of small is seriously skewed, me thinks.

There’s an article about someone who predicted the last election correctly and his predictions for this one. This seems irresponsible to me, because once people read this and see that he did not predict their candidate, whichever one that is, to win, they will possibly not even bother to vote. You know how people are. Self-fulfilling prophecy, anyone? If you don’t bother to vote, of course your candidate is that much less likely to win. It’s like science, just because you can, doesn’t mean you should. Why don’t people get this? And another thing, even if you hate Biden with the burning passion of a thousand suns, he is still a better choice than the orange man, who is faster and faster destroying democracy in this country while you all stand around reveling in the permission to hate everyone else that he has given you. Remember, you could be next. I remember reading about people who lost their health coverage due to his actions, who then said, “I didn’t think he meant me.” It’s okay if it’s someone else, but when it’s you, hmmmm. Good ‘Christians’ all.

So far, liking new homemaker. We went over the list to make sure she understood everything and could actually read my writing, which seems to be going haywire lately, and she already called me from the store to check on a possible change of item. So yay. Like everything in life, there are good and not really so good homemakers. I have had some actually horrible ones in the past, and some that I still miss because they were just so great. But it is a sucky job, for extremely low pay, and anyone who can move on to something better, does move on to something better. I don’t blame them in the least. Even if the pay was spectacular, it is still a sucky job, cleaning someone else’s toilet and doing their laundry and shopping and whatever. I am only having the shopping and trash done right now, because nobody ain’t coming in here no way unless it is a dire emergency, like finding my cat if there’a fire and I couldn’t get her out. Like that. 🙂

New homemaker back and is spectacular. Hope I get to keep her and that this wasn’t a one time deal. Will find out tomorrow. Yay.

The New York Times Tech newsletter has an article about your favorite tech. Mine is my original keyboard Kindle that I’ve had nine? years. It still works, and it has been used probably thousands (hundreds?) of hours over that time. They don’t make them anymore, I’m sure I’ve talked about this already, but in my mind, it is the best Kindle they have made and I absolutely hate them for taking away my ability to purchase a replacement for when it finally gives up. I used to love Amazon in general, but things have changed and also the whole Bezos is an evil shit thing has come up in the meantime, too.

I think subscribing to The New York Times has been one of my better decisions. There was a deal that was too good to pass up, or I would not have done it, but I think now I will resub when this one is up. Lots of info, and I do love me some info. I like to learn things. My teeshirt says, ‘It’s what I do. I read books and I know things.’ Yep. Knowing things is good. The better informed you are, the better choices you can make.

I need to go lie down, but once I’m on here, I tend to just stay on until I practically fall off the chair. LOL

Still kind of reeling from the Beirut thing. Today an article mentioned that half the city was damaged. Half the city was damaged. By negligence on the part of officials who, just like ours, think they are too good to do their jobs. God, people suck. They suck so bad in general, that the really good ones kind of get lost in the shuffle. Watched Mary Poppins on Disney yesterday, and one thing I loved was when Mrs. Banks sings this: 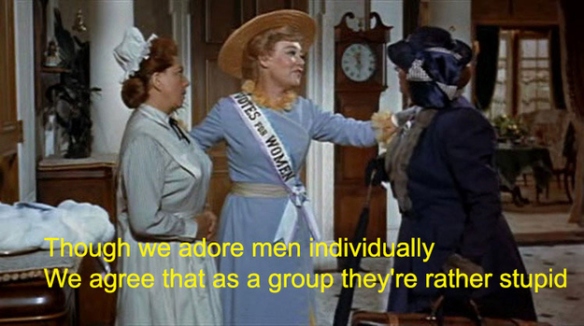 She is referring to men, but it applies here as well. 🙂

I wish I wasn’t so angry, but there is just so darn much to be angry about in today’s world. Where’s that magic wand when you need it?