Just read something that stated that fibro is not an autoimmune disease, which agrees with most things I have read over time.  It seems to be a flaw in pain response, nerves, brain function.  Which got me thinking.  I have read, and not sure of the validity, but I have read that a lot of people with fibro have had difficult childhoods or endured traumatic conditions in young adulthood.  Living in a toxic environment such as in an alcoholic household, child abusers, extreme poverty, etc, can cause hyper-vigilance, where you body is unconsciously holding itself ready to defend itself, fight or flight. It’s nerves and muscles and whatever else also at the ready.  I have noticed it in myself, after becoming more aware through studying zen and being in therapy, that my muscles seemed always to be tense.  Regardless of the situation.  So I wonder if fibromyalgia is in part a manifestation of that hyper-vigilance.  Your body always being ready to combat pain maybe somehow gets mixed up in your head so your body always thinks it is in pain, even when nothing is actually wrong.  Just thinking.  I have a lot of time on my hands. And the fatigue is from all that tension all the time.  Just speculating here.

Not going stir-crazy yet, but the signs are there.  Not wanting to get up in the morning, trying to drag out the sleeping.  Then, when I finally give up and get up, it’s always at the time I would have been getting up anyway. What’s that about?  Struggling to keep up with things on my own. I am used to having people in to do the hard stuff.  I need to vacuum, seriously.  Cats are not the neatest animals, with little bits of cardboard and who knows what all every where she goes.  Worth it, though.  Gertrude is funny.  She keeps getting up on the printer in the bedroom and knocking the router and phone which are next to it, over.  She actually disconnected the router the other day.  Yes, I would put those things elsewhere if there was an elsewhere to put them.  There is not. Anyway, went in the room yesterday and she was perched on top of the router like a queen surveying her realm.  How can you not love Miss Destructo?  Seriously. 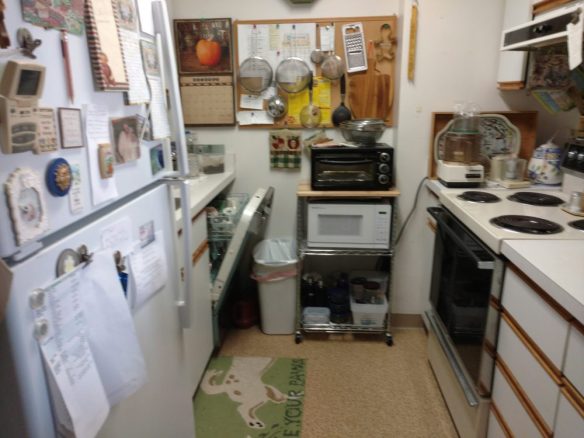 I did a grocery order a couple of days ago.  Pretty good, it was delivered about an hour after I ordered.  Instacart person left it outside my door and left so I could open door and bring it in.  Gave a good tip.  I am a good tipper anyway, because those folks get paid about a millionth of a second’s worth of what Jeff Bezos makes in a minute.  (They don’t work for Amazon, of course, but still.  Right?) Or practically nothing, and they use their own cars.  Wear and tear and oil and gas have to come out of the  pittance they are paid.  Ranty Jean is on a rant today it seems.  Anyway, wiped down with disinfectant wipes anything that had to go in frig or freezer, and just left the rest in the bags on the floor.  I have a teeny kitchen.  Teeny  Two people is a crowd in it.  One more day and I think it’s safe to unbag, it will be three days. Maybe I’ll wait till Saturday.  🙂  Meanwhile the floor is half covered with plastic bags of canned and boxed goods.  Only five or six, it’s a very small floor. This pic is the the entire kitchen.  Sink is on the right of the frig.  It is not even close to this neat at this moment.  Plus, the calendar is gone and there is nothing on the cork board because Miss G removed it all for me.  Soooo helpful.    And, I washed the produce by hand under running water. That’s all.  Never use soap or dishwashing liquid, just water.  So far, so good.

Am hoping to cook today, too.  Meatloaf for the freezer, and Fritos Casserole for now.  I love Fritos Casserole.  My family used to love it.  And you get Fritos.  What’s not to love?  Recipe?  Not a cooking blog, but hey.  Oh, want to make some croutons with the ends of bread from the freezer, which I cleaned out day before yesterday.  Yay, me.  LOL  There’s  half a baguette, half an italian loaf, one of those rolls that come with Chinese food (rolls with Chinese food?  Weird).  Anyway, recipe:

Brown 1 cup chopped onion, chopped garlic to taste, 1 pound ground beef til pink is gone.  Stir in 1 can (12 ounce) evaporated milk, 1 can rinsed, drained pinto beans (or beans of choice but if you don’t use pinto beans you are crazy), 8 oz tomato sauce, 1 Tablespoon chili powder, (you can adjust to taste).  Fold in 1 generous cup (I like cheese) grated longhorn or colby cheese, and about half a 9 ounce bag Original Fritos, crushed.  (See, leftover Fritos. It’s a good thing) Greased baking pan (I use a metal mixing bowl, about two quart size but I think an 8×8 pan should work)  Top with more grated cheese and some more Fritos.  Bake at 350 for about 20-30 minutes. Serve with Fritos on the side.  Ha Ha.

I am still waffling about Amazon.  There are some things I can’t get anywhere else, some I could except not during the plague.  So it’s kind of necessary for me.  On the other hand, Bezos, the richest of the rich, is also the greediest of the greedy and treats his workers, you know, the ones who do the jobs that make the money for him, like shit on his shoe.  Don’t bother excusing the expression, because that’s exactly how important they are in his world-view.  The man disgusts me, and yet I need his company to survive right now.  Rock and a hard place, anyone?  I can’t afford massive shipping charges even if I could get some things elsewhere.  Prime is a really good thing, and so would Amazon be if the workers were given a wage commensurate with their efforts, and safe working environments and good sick leave pay and policies. But no.  Jeffy baby needs all he has and more, because he obviously plans to live the thousands of life-times it will take for him to spend it all.  So every time I order, I develop just that bit much more self-loathing and sense of betrayal to those workers.  Social consciences suck, let me tell you.  It would be so much easier to be that cold, uncaring type of person that money seems to turn you into.  I’d rather be poor, I think.

You know how hard it is to get things done when pain rules your every movement?  Hard.  Determined Jean is determined, however.  I will Get Thinks Done.  Seriously.

Typing does not usually hurt, but today it does, so