It occurs to me that I should have called kitty Janet instead of Gertrude, because I keep finding myself saying. ‘Dammit, Janet’, whenever she is being El Destructo, which is pretty much every second she is not actually sleeping.

She’s also a pretty good humidity indicator, judging by the fact that she had a blue feather from her toy stuck to her this morning.  I kept trying to get it off, and it would just glom on to another spot, like she was a magnet.  So we now have simmering water on the stove.  See, cats are good things.

Check out my Christmas cactus.  It was given to me by my Traci (a former homemaker) years ago, and was in a small pot for a long time.  Finally repotted it into this, and it took off.  Several weeks ago, Miss G broke off a piece, which I stuck in a pot of spider plant.  It took, and they both have just gone crazy with blooming.  Not complaining, mind you.  Having pretty flowers on my window sill is a very good thing.  And Gertrude does not try to eat them. She is not a plant-eater, thank goodness.  Old Gertrude definitely was, and completely killed off a massive spider-plant I had by just continuously eating it down to the nub.  It finally just quit trying. Poor baby.

First Gertrude. I miss her a lot. She was such a good companion. 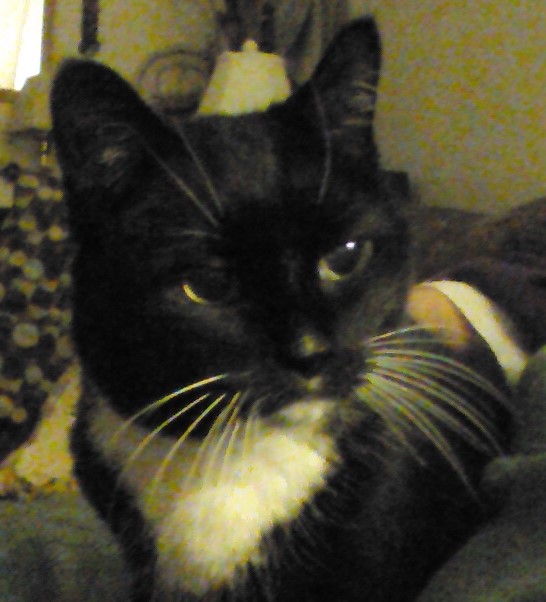 It’s very cold out. Winter is on the way. Snow, I hope. I like snow. Later, dear readers. Have a lovely day/night/whatever it is wherever you are.