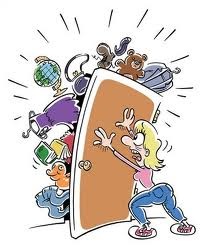 is coming tomorrow.  She has another job and tomorrow is the only day she has free.  Other job is pretty much the same, but for a company, not herself.  I am  hoping to spiff up the kitchen a bit today.  Took three ibuprofen a few minutes ago, so hopefully I will be in some sort of working order later on.

After some icky humid days, it is going to dry out this afternoon.  Turned on the a/c yesterday for the first time this year, mainly for the homemaker, who then spent the entire two hours at the grocery store.  But the a/c is still on.  🙂

Been thinking a lot about this being alone thing.  Friends move on.  I get that.  They don’t need you anymore because they have other things in their lives, not having a car, so can’t go to them instead of them coming to you, that makes a difference, too.  So what do hermits do?  How do they survive without much human contact?  I’m actually pretty good on my own, it’s just sometimes it feels like I am dying of loneliness.  Just sometimes, though.  I need to think on this.  What to do, what to do?  🙂