So far. It’s after 8pm, but I could still do more. I haz engerny. Is miracle.

There were a couple more things, but I’ve forgotten.
There are a lot of individual steps to doing some of those, like lining the shelf. Take everything off shelf. Get measuring tape. Measure shelf. Find shelf-liner. Measure and cut shelf-liner. Put shelf-liner on shelf. Put mugs and glasses back on shelf. Return rest of liner and tape measure to proper places. That’s just one thing. There have been years where I could not do all those steps in the same day. And this is more than I would have been able to do in a month not that long ago. And I did it in between Facebook, Twitter, Tumblr, blogs, fan fiction, and checking the radar periodically to see if the thunderstorms heading our way were going to fade out before they got here, like they’ve been doing pretty much all summer. We had one two days ago with some really cool lightning, but it’s become a rarity. We used to have storm every Friday, only because it was sci-fi Friday and I was trying to watch things. I don’t unplug everything like I used to, so of course, no storms. :). There was a ligtning that looked like this, but without the green jog at the end. 🙂 Never seen anything like it before. 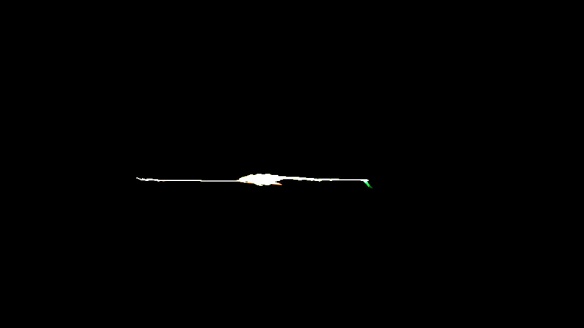